{Research is helping us see temperamentally “difficult” babies in a more positive light. With this research in mind, parents can be encouraged about the future of their child.}

One of the classes I remember most from grad school was the child development class in which we learned about children’s temperament. I had an idea of what temperament meant, but it wasn’t until I watched this video that it really hit home:

From as early as 9 months old (and even earlier), children have definite temperamental differences.

When I became a parent myself, these temperamental differences became even more clear to me. Both my boys, much like the boy in the video, have a persistent, strong-willed temperament. However, unlike the baby in the video, they are not fearful of much of anything.

I went back to my notes on temperament and found researchers Thomas and Chess’s classic temperament study to try to help me understand my sons. Their study of temperament identified 3 temperamental styles which they labeled, “difficult,” “easy,” and “slow to warm up.” Although I don’t care for these labels, they still persist in much of the research literature. I realized that my sons might fall into the “difficult” category but I wanted to know more.

The Interplay of Temperament and Parenting

After delving into the research, I found a fascinating picture of how a child’s temperament and parenting work together to affect development. Based on the research that is coming out on this topic, it is becoming more and more clear that how a child’s temperament influences his/her later behavior has a lot to do with the quality of the parental relationship. A recent study from the University of Maryland further reiterates this idea:

— Researchers followed 84 infants from birth to age 2– Babies were rates on their level of irritability. This was based on how they reacted to stimuli such as hearing a bell ringing or being undressed

— At 1 year of age, the attachment style of the babies was measured using the classic attachment rating process.

— At 18-24 months of age, the children were brought to the laboratory to see how they reacted to an unfamiliar environment

— By contrast, toddlers who were more irritable as infants were less likely to be sociable if they had an insecure attachment to their mothers

— Interestingly, for toddlers who were only moderately irritable as infants, the quality of attachment with their mothers had little influence on their sociability or willingness to engage with the new environment

So basically what this study tells us is that children who are highly irritable or “difficult” as babies are more vulnerable to the role of parental influence. If parents are responsive to them they have as much (or perhaps greater) likelihood to grow into sociable, engaged toddlers. However, these “difficult” babies are also more vulnerable to a lack of parent responsiveness and if this need is not met they are also more likely to be withdrawn or less sociable as toddlers.

This topic is so important because often times I think parents consider their child’s temperament as something permanent or something that they have little influence over. Based on the research that’s coming out, it’s looking like temperament is more like a moderating factor. It may affect how susceptible a child is to the outside environment, including parenting 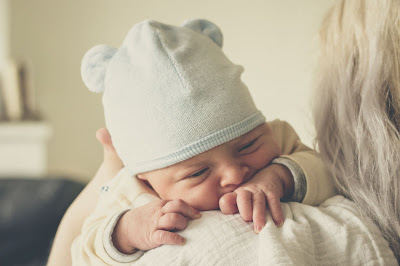 I think a lot about this topic because I worry about all the babies out there who are considered “difficult” or have an irritable temperament. They often put more of a strain on parents–they require hours of holding, rocking, and soothing and as a parent, you may wonder if you can keep it up. I worry that many parents or caregivers will simply think the child has a “bad” temperament and not see the positive characteristics the baby or child has to offer.

After reading the research, I have begun to see babies labeled as having a “difficult” temperament as having great promise for being outgoing, social children. These babies seem to be the most sensitive to parents’ behavior and reactions, even more so than “easy” babies.

Thus, while these babies may require more effort and attention, the amount of influence parents and caregivers have on these babies is also greater. There is something lovely in thinking about an irritable/fussy baby who turns into an outgoing, sociable toddler and this can be in large part due to attentive, responsive parents.

Want to learn more about temperament and how it influences your parenting? Get your e-book and learn how to parent with your child’s temperament.

So if you are a parent of an irritable infant, take heart! All the effort you are putting forth for your child really is worth it (as if you had any doubt). In a year or so, you may begin to see an adventurous, engaging toddler emerge in your midst.

Tender Beginnings: my book just for moms with new babies. It includes a discussion of temperament, fussy babies, support and advice for the early months of motherhood. Don’t walk those early months alone!