When my 7-year-old started kindergarten a couple of years ago, I was struck by how different our interactions became. Being a stay-at-home mom, I was used to having hours of time with him each day. He went to preschool a few mornings a week prior to kindergarten, but even with that, we played together quite a bit. In between me doing chores and cooking meals, we would have an almost ongoing dialog about whatever he was playing. In this role, I always had a sense of what was going on in his mind, what he was working on, what he was interested in (which changed almost hourly).

Going from this to kindergarten where he was gone much of the day was a shock for both of us. Although I asked him questions about school, as many parents know, you don’t often get a complete understanding of what went on during the day.

With this feeling of disconnection, sometimes came misbehavior. Have you noticed this with your children too? Especially when they are little, feeling connected to their parents is really crucial to their emotional well-being, which of course influences their behavior. 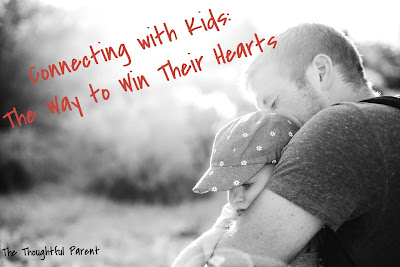 As I noticed this change with my son, I began to hear similar things from other parents. One of them suggested spending one-on-one time with him each day (or at least a few times a week). With a then one-year-old in the house at the time, this was challenging, but we made it work as often as we could. Soon, I did notice a difference. My older son began to settle down more and listen better to me when I asked him to do things he didn’t really enjoy (e.g., chores, homework, etc).

Research tells us that connecting with kids on an individual basis is helpful, not only for managing behavior, but for their emotional development. In these times of one-on-one connection, we can provide some “emotional coaching.” That is, help them label and understand their feelings. Then we can help our kids learn to cope with these emotions and even aid in solving problems that may come up at school or with friends.

Fast forward two years later and now that son is a second-grader. He is much more independent and often enjoys playing Legos in his room alone for quite a long time after school. From time to time, however, I will notice him pulling away and becoming kind of moody again. This is my cue that he once again needs some one-on-one time with me. He is now old enough that sometimes he will even tell me he wants me to play with him or he feels like I’m not spending time with him.

I’m always thinking of ways that he and I can reconnect. Being a boy, I’m not always in touch with the activities he’s interested in–Minecraft, light saber fights, etc. I try to get involved in his activities but I would much rather be reading books with him or working on a coloring book. That is why when I saw the Connected Hearts Journal, I was excited. Here was an activity we could do together that I think we would both enjoy. Beyond that, I think it will really help us reconnect in a meaningful, but also fun way. 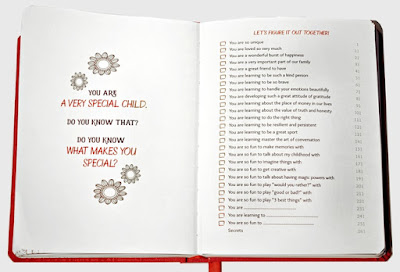 The journal includes questions for parents and kids to answer and think about together. It also gives parents an forum for providing kids with wonderful positive feedback on the great things they have noticed their kids doing. Additionally, there is plenty of space to explore topics of your choice. My son loves to draw (more than writing) so I could see this being popular with him.

Maybe my favorite part is the little section at the bottom of each page. It offers the kids a chance to reveal any secrets they want to share–either in writing or in person. What a great idea! I think many kids tend to hold thoughts or worries inside. This gives them an easy way to share without it being so difficult to bring it up with their parents.

In our fast-paced lives, it is often easy to forget that our kids crave connection with us more than anything. If you notice your child pulling away or acting out in less-than-positive ways, you might try some of these ways of connecting. You might be surprised at how much better it makes both of you feel.