Sneak peek: Does co-sleeping have an effect on marriage? Can co-sleeping ruin your marriage? This issue is a common question among parents. Luckily, research offers us some insight into this tricky topic

I was scrolling through Fatherly the other day when I came across this article, “How Co-Sleeping Ruined My Marriage.”  Like most of you, any reference to something “ruining my marriage” makes me perk up. I decided to read on.

Well, the husband, in this case, recounts he and his wife’s ongoing, (and terminal as it were) disagreement over whether she should co-sleep with their two young sons. As the title implies, it did not end well.

It made me wonder–is this a common problem? What is the effect of co-sleeping on marriage? Can co-sleeping ruin your marriage? I know couples sometimes disagree over the sleeping arrangements of themselves in relation to their children, but does it really lead to breakups? Is co-sleeping bad for marriage?

Co-Sleeping with Kids: The Talk That Rarely Happens

As the husband in the story pointed out, one of the issues in their co-sleeping battle was the fact that they had never really discussed sleeping arrangement before their sons were born. They fell into a pattern of co-sleeping early on because it was easy and they were desperate for sleep. Over time, however, his feelings about this changed.

I can really relate to this story, like many of you probably can as well. Before our first son was born, my husband and I had planned that he would sleep in a bassinet in our room and slowly transition to a crib in his nursery.

Well, like many new parents, I was surprised to learn how difficult this can be. During his first month or so of life, our son rarely slept for more than 30 minutes at a time unless he was being held, preferably on someone’s chest. Needless to say, this put a kink in our plan of him sleeping in the bassinet.

Eventually, we became what researchers call, “reactive” co-sleepers. In other words, we did not plan to share our bed with our infant but did so as a reaction to his sleeping habits. This is in contrast to “intentional” co-sleepers who plan from the beginning to share their bed with their infant. As it turned out, over the course of several months our son was able to sleep longer periods on his own, first in our room and then in his crib in his own room. 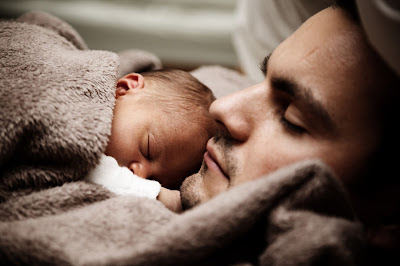 What is the Effect of Co-sleeping on Marriage?

This brings up an important point–the distinction between “reactive” and “intentional” co-sleeping. This is what the research really focuses on looking at how it may influence marriage. Although only a mental distinction, the idea of parenting in a way that does or does not correspond with your ideals (in this case bed sharing) may influence the interactions between family members regarding this topic.

So let’s look at what the research has to say:

The results of the study were quite illuminating.

However, when you consider the distinction between “reactive” and “intentional” co-sleepers, a difference in marital satisfaction was seen:

There are several ideas I think this study helps us understand. Most clearly, it shows that the supposed negative effects of co-sleeping are not straightforward. Co-sleeping, in itself, does not necessarily make your marriage happy or unhappy. It seems what is more important to marital satisfaction is the path by which parents come to the decision to co-sleep. Therefore, the question of: can co-sleeping ruin your marriage is not a simple “good or bad” scenario; it’s more nuanced than that. The effects of co-sleeping are intertwined with the relationship itself.

Of courses, like any social science, this study comes with the usual caveats. This is only one study–you cannot make sweeping generalizations from one study about whether co-sleeping can ruin your marriage. Additionally, while interesting, this study is not long-term. We have no idea how many of these couples stayed together in the long-run or how their marital satisfaction may have changed over time.

Co-Sleeping Research and the Reality of Parenting

In a larger sense, I think this study of co-sleeping effects on marriage sheds light on the important distinction between “reactive” and “intentional” parenting choices in all sorts of contexts (e.g., discipline, nutrition, etc.). In our lives as parents, I think we all come across issues in which we make choices that do not always correspond to our pre-parenthood ideals.

Most of us probably engage in parenting choices every day that are not so “intentional” in their nature. Sometimes we do things just to get through the day or phase of a child’s development. In itself, this is not always a bad thing. Many times our planned responses change to accommodate our child’s needs or temperament.

I “intended” that I would be able to control my infant’s sleeping habits. Ha! Little did I know that his temperament would dictate that. My “reactive” parenting choice was to respond to his needs and my need for sleep.

However, when faced squarely with a situation in which I realize that I’m acting in a “reactive” rather than “intentional” way, I find it helpful to keep in mind a distinction between long-term and short-term goals.

Related reading: Understanding Toddler Growth Spurts (when to expect them!)

In the case of co-sleeping, my long-term goal was always to have my son sleep in his own bed. Even while we were co-sleeping, I still had that in the back of my mind. As a result, we were able to slowly make this transition while still meeting his need for closeness.

I think keeping in mind this idea of long-term versus short-term goals helps us keep a balance between “reactive” and “intentional” parenting choices. The reactive choice we make today does not have to be set in stone as a choice that remains forever. A reactive choice might meet a short-term goal, but we might need to make more intentional (usually harder) choices to meet a long-term goal in how we want to parent.

Can you relate? Did you discuss the plan for co-sleeping before your child arrived? Comment below and let’s chat.


Like this article? Here are other resources for sleep and infants:
Mom’s Expectations About Infant Sleep: Is There a Connection to Actual Sleep Patterns?

You Can Survive Colic

Co-Sleeping: The Ultimate Guide (from MomWoot)