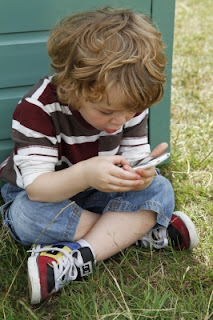 You may have noticed that SpongeBob Squarepants was all over the news last week. Who knew a little cartoon character could get so much media attention? The main point of the study was that 4-year-olds who watched SpongeBob for nine minutes had a more difficult time with tasks involving “execute function” (i.e., self-control) than kids who watched nine minutes of a slower-paced cartoon or those who drew pictures instead. The executive function task usually involves seeing how long a child can wait for the desired reward like a piece of candy.

The news media jumped on this story and again brought into public discussion the issue of media and the role it plays in children’s development. While the issue of the study itself (fast-paced TV shows) is important, for me it brings to mind the larger issues at hand. What does it mean for us to be parenting children in an era so consumed by media and technology? Dimitri Christakis, a leading researcher on this topic, makes the distinction between “digital natives” and “digital immigrants.” Today’s generation of children is considered digital natives because they were born after the influx of modern digital technology (e.g., email, internet, iPhones, etc.) so they have never known a world without these inventions.

Their parents (and older generations), on the other hand, are digital immigrants because we only came to experience the internet and related technology as adults. In a sense, then, it is our role as parents to guide our children through a media landscape that we ourselves did not experience as children. Yes, we had TV as children, but we didn’t have the plethora of media choices that now present themselves to our children at every turn. There are online videos, portable games and video players, and numerous gaming devices, not to mention smartphones and tablet computers. The availability of media technology is sometimes overwhelming to us as adults, so consider how overwhelming it must be to young children. Of course, it may not seem like it’s overwhelming by looking at them. These “digital native” children are often more adept at the new technology than we are, but one thing we as adults are more skilled at (hopefully) is self-regulation. We know how to regulate our use of technology so that we turn it off if it is distracting us from our task at hand or causing other problems. Children, on the other hand, are not usually very skilled in self-regulation at an early age. Many children, if allowed, will use two or three different types of media devices at once. You know you’ve seen this: the tween who is texting while also playing a video game and watching TV.

Some would argue that there is nothing wrong with this type of multitasking, media immersion. Isn’t this type of immersion going to prepare children for the work world they will face in the future? Multi-tasking is the name of the game in the business world, right? While I know that this type of technology multi-tasking is commonplace, I think something is lost in the blur of constant noise (not to mention that research shows multi-tasking to be ineffective).

Regardless of one’s religious/spiritual beliefs, I think almost everyone recognizes the need for silence in their lives. Time for reflection, and thinking about decisions, beliefs, etc. It is increasingly difficult to find this type of silence in our media-laden world. It has become very difficult to find time to disconnect from all our technological devices long enough to focus on our inner thoughts. To me, this is the real concern with the SpongeBob-type shows of the world–it acclimates kids to a fast-paced mindset that is just unnecessary at a young age. Soon enough they will be inundated with media images, video games, etc., so why not let young kids enjoy the simple, slow pace of childhood?

We all want our children to be thoughtful and considerate friends and citizens but this is hard to do if you are constantly distracted by technology. It’s hard to focus on the ideas of another person if you are texting two other people at the same time you are talking with another. Just as important, we want our children to find and pursue their interests and passions in life–to find something that they really love to do. I feel it’s hard to get in touch with this if you are always connected to some type of media or device and do not allow time for silence.

I can already tell that raising a “digital native” will have its challenges. Finding the balance between using technology for productivity, education, and entertainment without having it consume my child’s life will be difficult at times. Personally, my goal is to help my son learn to use technology effectively at each age, but also learn how to turn it off and enjoy the silence.