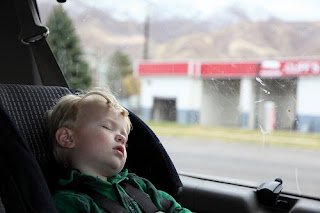 As parents we know that sleep is important for our kids and ourselves. One of the biggest struggles many parents face is getting their little ones to sleep through the night consistently. Many times, we may think this is a selfish goal since that means we will get more sleep too, but new research is showing once again that nighttime sleep is important for young children’s cognitive development.

This study appeared in a recent edition of the journal Child Development and was conducted by researchers at the University of Montreal and the University of Minnesota. One great thing about this study is that it was longitudinal. Researchers first studied the children when they were 1 and 1 1/2 years old, then they followed up with them when they were 1 1/2 and 2 years old. Granted, it’s not a long time span for follow-up (6 months) but at least it was longitudinal which is an advantage over a one-time assessment.
The children’s parents were asked to complete a 3-day sleep diary for their youngsters, which recorded nighttime sleep, naps, and any night wakings. Then the children’s cognitive development was assessed, with most of the tests focusing on executive functioning. I’ve discussed executive functioning previously on this blog, but it’s a crucial aspect of child development in the early years. Executive function involves skills like one’s ability to control one’s impulses (i.e., self-control), remember things and look at information in new/creative ways (i.e., mental flexibility). It may seem like these skills are too complicated for young toddlers, but they are indeed developing these skills even at this young age.
The main finding of the study was that children who got most of their sleep at night did better on subsequent tests of executive function, particularly those related to impulse control. These findings held true even after considering other factors such as parents’ background and the child’s overall cognitive skills. Interestingly, the number of nighttime wakings and total amount of sleep were not related to children’s executive functioning. I found this last point particularly interesting, given that nighttime wakings would presumably be disruptive to the rest that the brain is getting during sleep. The researchers point out that they were surprised by this finding as well, but argued that this may be an artifact of the way sleep interruptions were measured in the study.
It is important to point out that this study does not necessarily imply a causal relationship between nighttime sleep and executive function. As the authors point out, it is possible that some children’s brains (for reasons not considered in this study) develop quicker and thus are able to regulate nighttime sleep and executive function sooner. The other idea is that family factors may have a lot to do with both children’s sleep patterns and the development of executive function. For example, previous research has shown that factors such as parental warmth, marital discord, and bedtime behaviors influence children’s sleep patterns. So it could be that certain family factors influence both the regulation of nighttime sleep and the development of executive function.
As a parent, I found this study to be added motivation to continue encouraging my toddler

to sleep well at night. Most parents of little ones already know that good sleep is crucial to toddlers remaining in good spirits throughout the day. This research just reiterates that thought. It seems odd that many kids seem to “fight” sleep so much when it is so good for them. Sleep does a body (and brain) good.
Photo credit