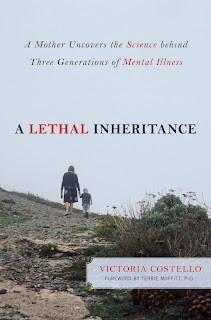 Today I’m honored to have author Victoria Costello guest posting on the blog. Costello is a well-respected science journalist and author of six books on topics related to psychology, mental health, and parenting. Her most recent book, A Lethal Inheritance: A Mother Uncovers the Science Behind Three Generations of Mental Illness, is a personal memoir of her family’s struggle with depression and schizophrenia. I will be reviewing the book soon, but I have already started reading it and I have to say it is compelling and insightful. If you or someone you know is dealing with mental illness, this book is a must-read. Please enjoy the post today which offers insight into some of the issues discussed in the book.

The Tangled Truth of Depressed Moms—and Our Kids
By Victoria Costello
Imagine you are the mother in this scenario. For several months now, your 12 year-old daughter has lost her sunny nature, and she often seems sad and withdrawn. Her teacher tells you she’s stopped participating in class and appears tired. You fear she’s becoming depressed because you’ve, had bouts of the blues yourself—as did your mother (or, perhaps, your father) before you. No one in the family ever received mental health treatment, so the idea of doing something about it (for either you or your daughter) feels foreign. You wonder, wouldn’t that be weak, and, besides, what will people say?
Speaking as the daughter of a depressed father and the mother of a depressed son, and as someone who has lived with major depression, this scenario, including the fear of weakness and stigma, is all too familiar to me. I only sought treatment for my lifelong depression after my oldest son was diagnosed with another mental disorder—and that was when I was forty-six. Since beginning on antidepressants, my depression has been in remission. Now, as a science writer who has looked deeply into family mental illness, I take every opportunity to inform other mothers what I’ve learned about family risk for depression and other genetically conferred mental disorders and how to head them off in your children.
Most people are aware that depression runs in families, but our knowledge tends to stop there. Myrna Weissman is a psychiatric epidemiologist who has spent three decades trying to find out exactly how this occurs, conducting research at Columbia University and New York Psychiatric Institute. “If the mother is depressed and just one other close relative in the family has a history of depression we know the children are likely to show up with either anxiety or depression by the time they’re fifteen,” Myrna Weissman told me in an interview for my book, A Lethal Inheritance.
One studyshe conducted over twenty years involved 161 grandchildren and their parents and grandparents. Among Weissman’s findings: there was a threefold higher risk of depression or an anxiety disorder (59 percent) for grandchildren who had a depressed grandparent anddepressed parent. She notes that anxiety disorder appears to precede depression in young children.
Severity of the child’s mood disorder also increased with two prior generations of depression. But then came this striking finding: when the children had depressed parents but not moderate or severely depressed grandparents, the grandchildren’s impairment was less. In other words, if left untreated, the grandparent’s depression was the decisive factor in the severity of the child’s disorder. Each of these results was compared to a control group of three-generation families without depression.
Another of Weissman’s pioneering studies measured the effects on young children of (only) treating their mothers’ depression. Of those children who shared a diagnosis of depression with their mothers at the beginning of the mother’s treatment, remission of symptoms was reported in a third of cases when their mothers’ treatment worked, compared with only a 12 percent remission rate among those whose mothers’ depression did not improve after treatment. It’s important to note that the children who improved did not receive direct treatment! All children of recovering mothers who themselves did not begin with a diagnosis for depression remained free of psychiatric diagnoses at three months, whereas 17 percent of the children whose mothers remained depressed acquired a psychiatric diagnosis.
The takeaway from Myrna Weissman’s research is that when a mother gets treatment first, a child is much less likely to suffer from either depression or anxiety. So, if you are a depressed parent getting help you can think of your actions as the best form of prevention for your child.
Another reason is that if you are in treatment you are probably also more informed about the symptoms of depression and how they may differ in children. Research is constantly giving us more valuable clues to help head off mental disorders before they take hold; for example, a just released studyin the journal Pediatricsshowing that irritability can be an early sign of depression in younger kids.
Still, getting a diagnosis for something that has always been part of you-and perhaps thedefining characteristic of many members of your family going back generations-can be a truly strange experience. Omnipresent depression (or anxiety) doesn’t feel like a symptom; rather it can seem more like a personality trait. According to a U.S. government survey, this familiarity is a major reason people give for not seeking mental health treatment. Other common reasons are a fear of being stigmatized and a lack of access to care. On this point, I can also say from experience that if you don’t have insurance coverage, you still have the option of going to your county mental health clinic where everyone is accepted for treatment and where the care is often as good or better than that received in private doctors’ offices.
My message to mothers is fix you first. Then you may not even have to take your child to see a mental health practitioner. If symptoms of an emotional or cognitive (thought or learning) disturbance are already present in a child, act sooner rather than later. As my sons and I learned, the next best thing to “fixing mom first” is getting help together.
Victoria Costello is an Emmy Award winning science writer who blogs for PsychCentral.com, Mamapedia.com, and MentalHealthMomBlog.com. She has five books out on psychology including: The Complete Idiot’s Guide to Child & Adolescent Psychology, and The Everything Parent’s Guide to Children with OCD. Her latest, A Lethal Inheritance, A Mother Uncovers the Science Behind Three Generations of Mental Illness, is just out from Prometheus Books.