Feeling the mid-week slump? How about a (possibly) controversial topic to spice things up? Seriously, I wrote this post awhile back but never published it. Today, in light of this month’s International Women’s Day, I felt it was an appropriate topic. Take note, this is a little off topic from my usual child development topics, however, I felt strongly about this topic so I’m publishing it in hopes that it will help broaden our perspective on motherhood. 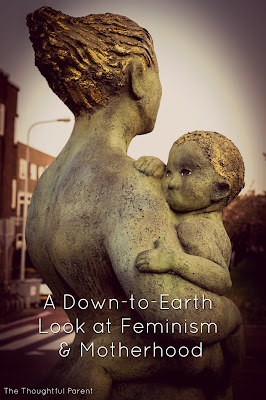 Who knew that a book by a French philosopher and feminist could raise such a stir among parents of all varieties in ? Although Elisabeth Badinter’s book, “The Conflict : How Modern Motherhood Undermines the Status of Women,” was released in awhile back, it hit shelves a couple of years ago and the reaction was immediate. Parents, be they the stay-at-home, employed, conservative, or liberal variety, had strong reactions to her argument. In a nutshell, Badinter contends that modern motherhood, particularly certain time-intensive “trends” such extended breastfeeding and attachment parenting, are antithetical to feminism. She argues that these practices are, in a sense, setting women back to the type of oppression and inequality that they experienced generations ago.

This topic prompted me to reflect on these parenting trends, as well as the nature of motherhood in general. First, what type of parenting methods are not time-intensive or do not require a great deal of self-sacrifice? I think that is called “neglect.” Any parent, female or male, who is worthy of the title “parent” is going to invest a lot of time and energy in their child. By their nature, children require a sacrifice of self. They are, after all, born thinking they are the center of the universe and do not figure out that they are not for several years.
Second, the idea that children have replaced men as the “oppressors” of women is outlandish. Yes, there are undoubtedly circles of mothers who are competitive, and some may feel pressured to follow certain parenting practices (i.e., extended breastfeeding, attachment parenting). I think these pressures generally come from a certain segment of the society and if one does not want to follow these practices, you can surround yourself with other people who support your choices. In the early months of motherhood, I too felt some of these pressures after attending a mothers’ group where extended breastfeeding, baby wearing, and co-sleeping were the norm. Although I actually practiced all of these activities to one extent or another, I knew I did not adhere to them as fiercely as this particular group so I sought out another “tribe” in which to surround myself. I soon found another group of mothers who, like me, did not adhere to one “trend” or style of parenting but rather made our parenting choices based on what we felt was right for ourselves, our children, and our families as a whole.
Here, I think, is the beauty of modern motherhood that Badinter is missing. Mothers today have the freedom to create this role in any way we wish. This is the true gift that the feminist movement has given us. As women and mothers we have the freedom to configure our lives in ways that are meaningful to us. Mothers of my generation, on average, waited longer to have children, are more highly educated, and I feel are more prepared to enter motherhood with our eyes wide open to the choices, opportunities, and yes, sacrifice that comes with this life path.
Badinter’s argument also sparked for me a larger issue about the role of self-sacrifice. There does seem to be an idea out there that anything that requires sacrificing your own desires for the sake of another is somehow anti-feminist or at least not progressive. I find this problematic. Generations ago women were required to sacrifice many of their ambitions/desires to care for children and husbands. This sacrifice was oppressive in the sense that women had few other options. If this lifestyle was not fulfilling to a woman, there was not much else she could do.
The difference today is that while this level of sacrifice is still present, women may choose how their life is configured. Many women find staying at home to raise children a meaningful and fulfilling lifestyle, even with the sacrifice that is involved in that choice. Similarly, women who work outside the home also face sacrifice and find meaning in that lifestyle as well.  The point is, women now have more choices. To my mind, opening up more choices to women is the primary goal of feminism. Almost any life choice is going to require some sort of self-sacrifice unless you want to live a life in which you have no relationships or commitments to anyone other than yourself. If that’s what it means to be a feminist, then I’ll pass.